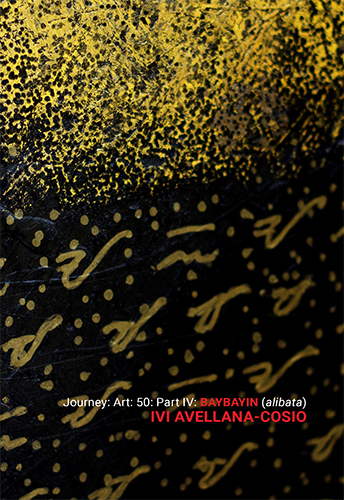 Galleria Duemila is proud to present Ivi Avellana-Cosio’s fourth part of her retrospective wherein she will present her in-depth research on the baybayin writing system, coinciding with the new law that has been passed by the House Committee on Basic Education and Culture employing the Baybayin system for the general public’s utilization. The artist’s deep-set interest for culture has manifested its way to her art since the 1970’s.

Named by the International Biographical Society in Cambridge, England as one of the Top 100 artists in 2017 and one of the top professionals in 2012, a resident name in the Philip Morris Philippine Art Awards and ASEAN Art Awards since 1994-1997 and the founding member and the past president of the Philippine Association of Printmakers, Ivi Avellana-Cosio stages her fourth exhibit at Galleria Duemila on May 5–29, 2018 in a series of retrospectives to mark her 50 years in creative making.

Her abstractions are compositions of vivid colors and formal elements, reminiscent of the rich culture representative of the various tribes such as the T’boli, Bagobo, Yakan, Talaandig, and B’laan and others. The paintings, a "neo-ethnic" series are a combination of tribal patterns, ornaments and the baybayin, the syllabary commonly, but erroneously known as the ‘alibata’ by which the artist tells the history of common ordinary usage and eventually a genesis of creativity for the indigenous Filipinos, still unmarred by the Hispanic and Christian influences back then. It as a medium of memories, a testament of the past composed in a contemporaneous way.