Conversations with my Masters

Spaces of Conversation, A Tête-à-Tête with the Masters

The starting point for some of Phyllis Zaballero’s paintings in her series entitled “Conversations with My Masters “ often begins at a place where most such give-and-take repartee ends….in a cemetery.

But it is not a site of mourning. It is in a part of Paris where the La Vie Bohème spirit still resides. Tourists flock there to photograph epitaphs of renowned names only previously encountered on a page. Fresh flowers and personal notes decorate the monuments. On a tombstone lies a sprig of daisies. Engraved on an elegantly simple mausoleum, the words “Famille de Gas” beckon to the visiting painter on a pilgrimage. Phyllis stands here before it, wreathed in an aura of seriousness and respect.

A living artist speaks to the spirit of a long-gone and legendary occupant of a familial mausoleum which is located in the Cimetière de Montmartre of Paris, France. Her captive audience of one is Edgar Degas, whose body is entombed there with the rest of the De Gas clan. We know with certainty where his physical remains are. But where the famous artist’s soul resides is unknown, of course. Could he be listening from the heavens? Or is he still creating his inimitable Art in some next incarnation where inspiration is eternal ?

I imagine that Phyllis commences to speak to Degas and wordlessly to herself, addressing the figure commemorated within those sheltering stones. Opening the conversation on a quietly personal plane, she humbly asks permission to use chosen images and snippets of his actual artwork in a purely modern way...to process and coax them to migrate into a flexible film of acrylic emulsion. We imagine overhearing her whisper about how his art, which has transcended and inspired many generations, could possibly continue by way of this ingenious language of technology , to energize the vision of Edgar Degas.

But there’s a rub. Zaballero wants to get into the act. She wants to conduct an artistic dialogue between the two of them, between the august Master and herself, a cheeky admirer. Could they have an intimate conversation in pigment and brush, in both serious and fanciful tones? The silence seems to answer yes. But then, coming from a place within her fondest dreams, Edgar softly whispers:

And so , as Zaballero whimsically recounts , this is one gate through which she enters to begin her dialogues with the Masters who have inhabited her very existence, beginning with the classicals, to the post-impressionists and then the modernists. By way of her artistic musings, we too are welcomed into the conversation space.

The dialogue extends from where it began, at the foot of the family tomb of Degas in Paris. We proceed, with his psychic permission, when she takes us on her conversational foray through the paintings of Edgar Degas. These iconic paintings pull us into private rooms, intimately as voyeurs of his ladies busy at their toilettes, in “Se Baignant” and “Le Bain” as a female nude turns away, stretching to bathe. From these private rooms, the next frames will transport us into the throbbing heart of turn of the century Paris.

The instantly recognizable ballerinas go through their exercises in “Le Foyer de la Danse”, touched with girlish charm in pink pointe shoes, though not without fierceness in an adjacent black-and-red-checkered room. The perspectives further layer and tilt in “L’Opera de Paris”, appropriately painted in performance splendor. We meander some more to the horse races, with “Les Chevaux de Course” and through the flower-speckled fields of “Longchamp”.

Then, we join her as next she interacts with the irrepressible Pierre Bonnard in “Pierre et Moi, Villa Castellamare” . In these domestic scenes we are coaxed inwards with freshly laid pastries and fruits. Shady, translucent leaves fall into the scene. More family feasts await in
“La Table” and “Le Bol de Lait” , all the while as Bonnard’s images, known for their vibrant hues and lightness, merge with surfaces painted by Zaballero’s own hand. The presence of the acrylic emulsion film expands the flat canvas, inviting our synthetic intuition to lean closer, not to touch, but to peer.

“I am here with you but I am really thinking of Henri Matisse,” Phyllis Zaballero says to me. The artist-at-present takes us further in, deeper now into the realm of her favorite idol, Matisse. Sunlight filters over the delicacy of fresh oysters on their half shells in “Les Huitres”, while the sounds of purposefully played notes almost become tangible in “Le Violiniste”. The process of transferring becomes meta and self-referential, especially felt when she juxtaposes other similar rooms in the striking “Grand Interieur Rouge”.

Throughout these shifting parameters, Zaballero enters each period with a thematic
approach, closely linked with her own exposure to the Western Masters of the art world. She recounts residing near the Museum of Fine Arts in Boston as a child in the 1950s. Nearby was the expanse of Fenway Park. Taking a break from play with her gang, they would enter the museum’s stately walls to visit the bathroom and drink at the water fountains. But only Phyllis would feel a pull to the light of the Hudson River Valley School’s expansive landscapes in a gallery and she alone stopped to stare with wonder.

This awe for museums planted a seed that grew into lifelong foundational work for education within these institutions. Following a teenhood in Switzerland, France and Spain, interspersed with trips in and around Europe, her cosmopolitan life was cut short by the sudden death of her father in Barcelona and an abrupt return to Manila. Hurled back into her birth country and with an Associate in Arts diploma but in severe mourning and culture shock, she looked ahead to returning to France to finally study Art in the University of Aix-en-Provence. Nevertheless, she was convinced by family to continue her tertiary education in a “respectable” field at the University of the Philippines from which she graduated with a Bachelor of Arts in Economics, of all things. Ten years of marriage to an understanding banker soon followed, producing three excellent sons!

In her present-day studio, Phyllis’ dedication to the Post-Impressionists shows in a combination of alchemy and archiving. Tucked in an urban townhouse with the façade of an idyllic cottage, the upper rooms are bathed in light her precedents would likely have approved of. Each of her sketch pads containing studies for every work is scrupulously documented, and cross-referenced with her photo, card and computer files. The pages are filled with identifying notes and corresponding color palettes for future archivists’ and restorers’ guidance. Between knick-knacks and remembrances, art materials are thoughtfully arranged in their set places.

Her conversations with these three artists come from a greater awareness. There is a sense of timeliness to these paintings, as well as a situatedness from an artist that grew up in a Western Art Historical ecology, although later immersed, or dunked more like it, into the heterogeneous world of the Filipino. The influences of the French are potent in designs of the interior, clothing, and views of open air. But there seems to permeate a subtle sense of the local - in a chair, an ornament, or even a personal pet.

Zaballero’s oeuvre documents a long and winding road, travelling from textured abstractions in grid formats in the 70’s to the graceful undulations cutting across Color Field backgrounds in the late 80’s. All throughout her early work she followed the strict discipline of an underlying structure of right angles, mercifully accented by gestures in myriad colors. One unwittingly found oneself looking into, or out of , the squares in what was to become her acclaimed Window Series. Her composition later loosens and expands, melting into the thrown splashes of abstract expressionism, such as her works executed in the northern state of Vermont in the U.S. while on a residency steeped in Mother Nature. Images in her far-ranging painting styles have reflected travels from islands in El Nido, Palawan to nostalgic trips in Spain with loved ones and camping out in the “Last Frontier” of Alaska.

Back home in the martial law setting of 1983, her historical , emotionally charged painting of Ninoy Aquino’s assassination and its aftermath marked a point of political activism that stirred then-society, resonating up to today’s issues of nationhood.

These latest “Conversations with My Masters” of recent years seem to be more measured and languid, although ever deeply reflective, while expressing a new analytical point of view. Albeit familiar to us because of the beloved subject matter of these three artists, they have begun to challenge the viewer with a fresh way of seeing ….and seeing yet again.

As these visual dialogues continue, we listen in on the timeless conversations that brighten the senses, in the joy of communion with life’s many pleasures. Zaballero pays tribute to these geniuses as a present-day woman with many years of steadfast joie de vivre , seemingly at all costs. She creates imaginative vocabularies in canvases made more meaningful by her avowed gratitude to her Creator for the generous gift of Art and for the priceless lessons learned during a long life spent gawking at the beauty created by the Great Artists of centuries past.
As the genial trio of Degas, Matisse and Bonnard speak with Zaballero and among themselves in our imaginations, surely with such sparks of genius flying about, their combined brushes will move in rhythm with inspired abandon. The old and the new then become fused in a sensuous choreography of color, line and light. 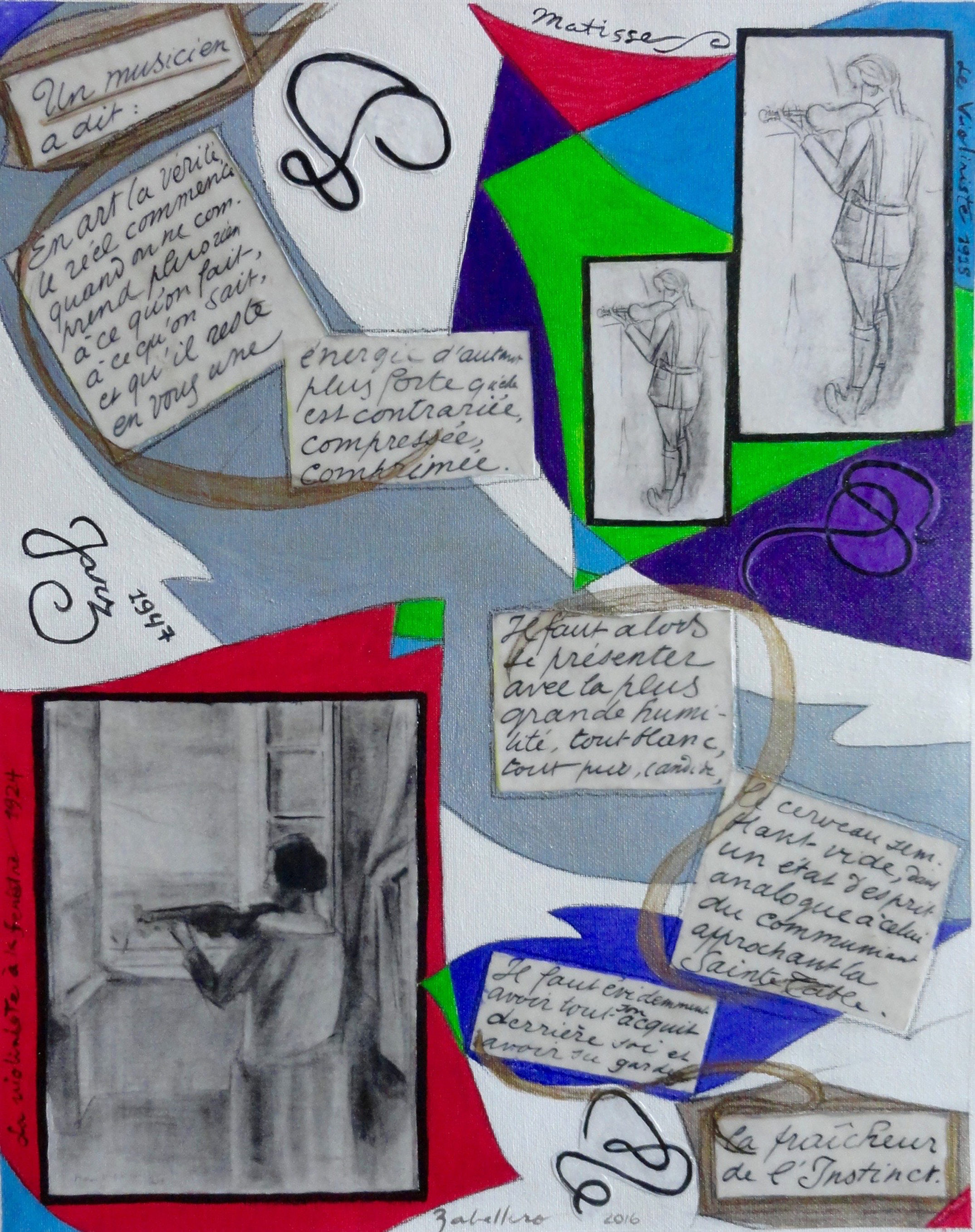 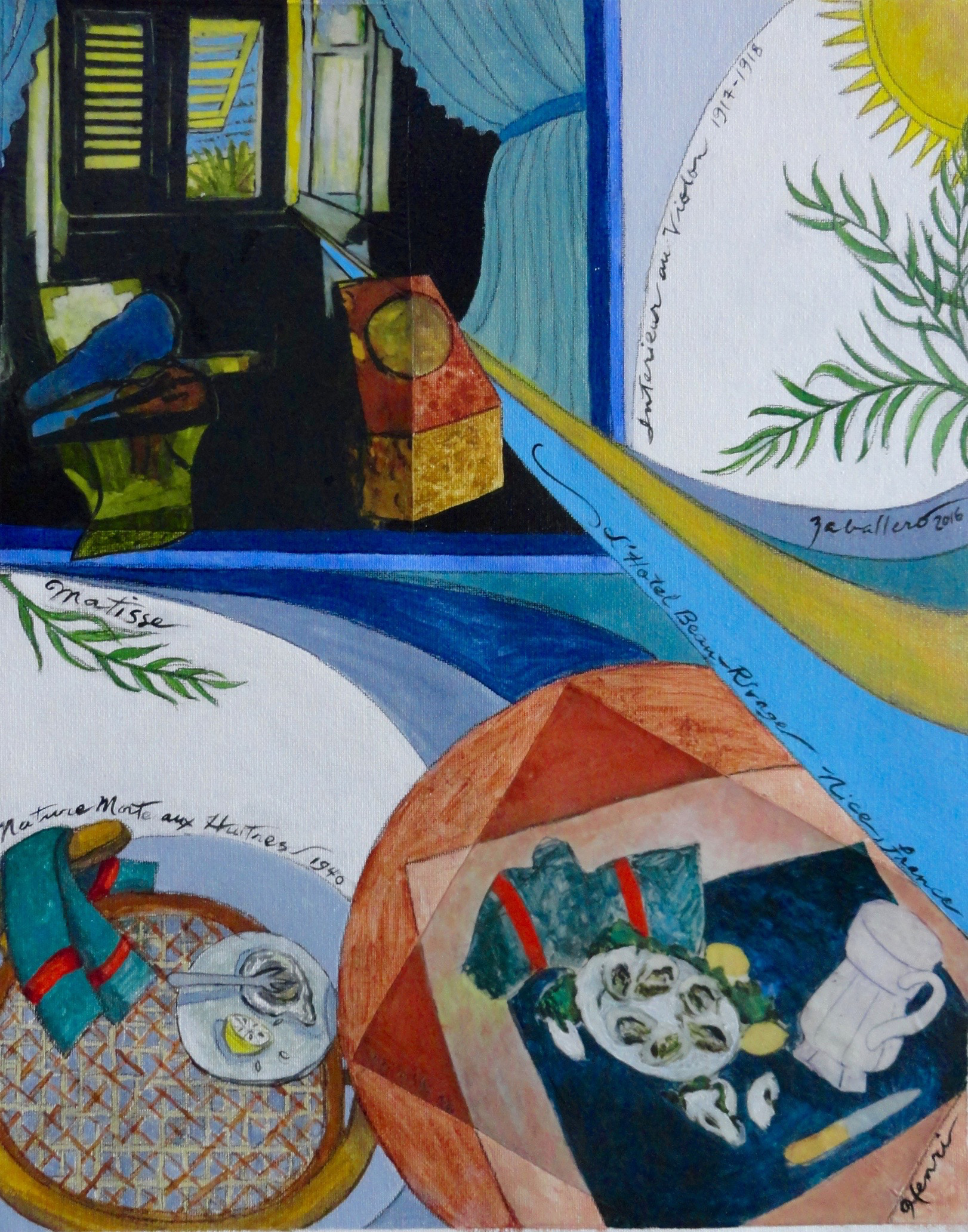 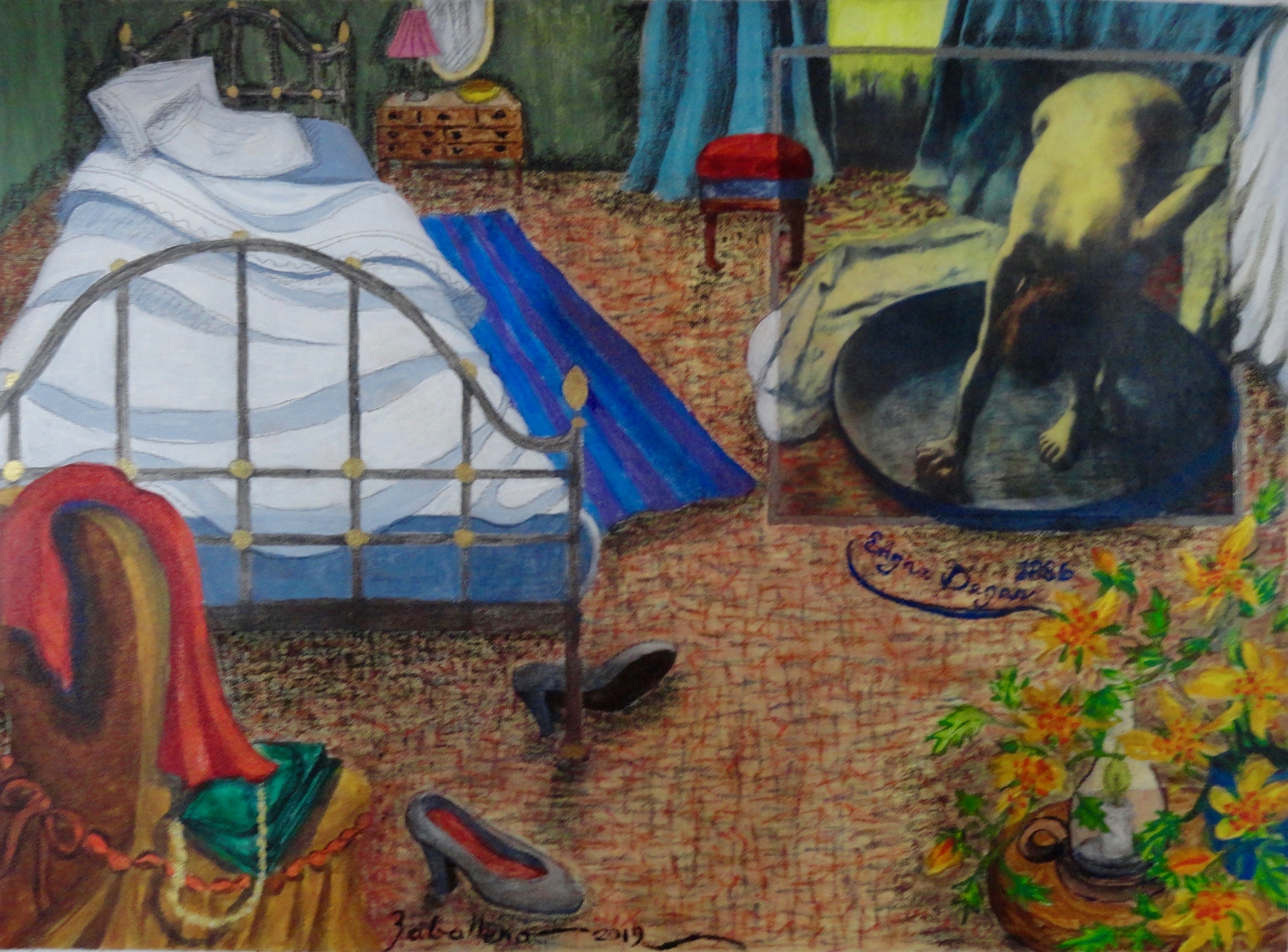 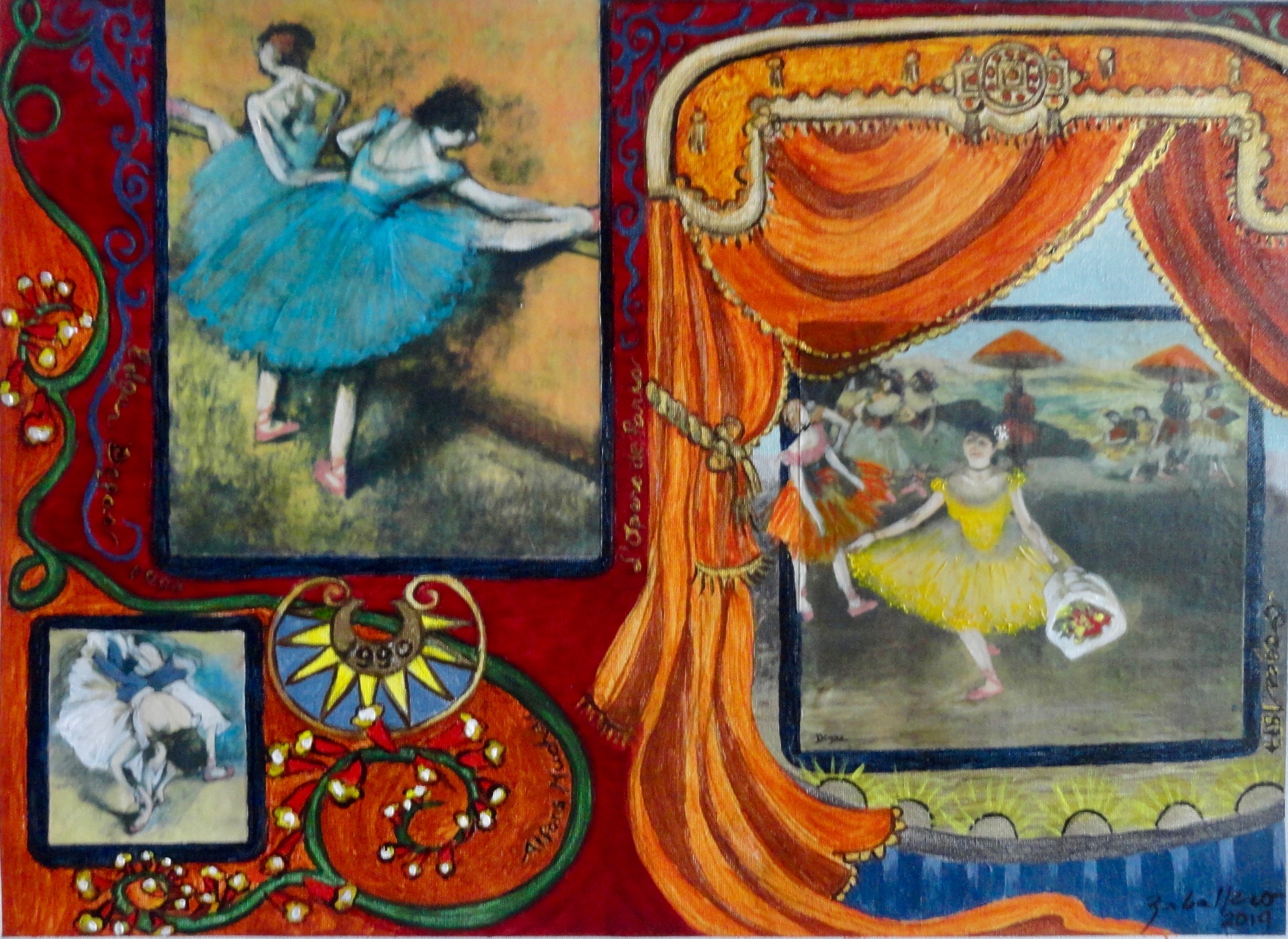